TLDR; Cryptocurrency is money! But what WTF is money?

Cryptocurrency is a new form of digital money. So to understand crypto, first we need to understand the magical man made creation directing our lives – money.

Today’s money is issued by the government (aka fiat money) and is represented by coins and paper plastered with selfies of dead presidents, but money hasn’t always taken this form. In fact, more than 90% of the world’s total money supply (roughly $50 trillion) is never printed. Instead, digital money is created and managed by banks using technology ill-designed to manage money.

It’s hard to believe, but not long ago people used beads, shells, etc. as money. How the hell did that work!?

Money is simply a universal medium of exchange that enables people to convert something of value into almost anything else of value. You can’t convert money into love and you can’t use money to rewind the clock, but you can convert it into just about anything of value that can be measured. We all use and trust money because everyone else uses and trusts money – it’s as simple as that. The hard part is getting a new money started; more on that later.

What makes for a “sound money” has been debated by philosophers and economists for centuries. Most of them agree money should fulfill the following use cases:

To accomplish this, “sound money” should contain the following properties:

But doesn’t money need to have value in and of itself? Apparently not. In 1934 the US government forced every American and every US bank to send their gold to the Federal Reserve in exchange for new fiat money which read something like, “This certificate is redeemable at any time for $20 worth of gold from The US Government.”

Everyone accepted this new money because:

Then in 1971 President Nixon abandoned the gold standard and the Federal Reserve switched out all the gold backed money for a new paper money, which said nothing about gold and wasn’t redeemable for anything.

Since the gold backed fiat money had become a global standard, no one seemed to notice when that money was swapped out for this new money backed by nothing.

Gold didn’t give the money value in and of itself, the gold standard simply prevented the government from printing more fiat money than it had gold on hand. Since gold is a finite resource (except for those near-earth asteroids covered in gold) so was the money supply. Gold enforced trust between the people using government money and the government itself.

To manage today’s money supply, the government “simply” tracks every transaction ever made by every person on earth and estimates how much money to create based on supply, demand, imports, exports, GDP, and a thousand other things.

Lack of trust in today’s money supply is a primary reason people are flocking to cryptocurrency.

Next: Why do we need cryptocurrency?

Reserve your username, get access to exclusive deals and help build the future of #CryptoCommerce. 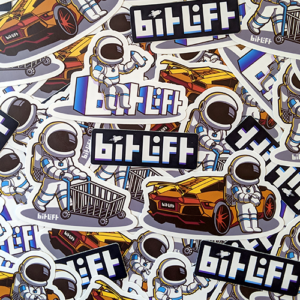 Take BitLift for a spin! Buy a Sticker Pack for just $1!